The eruption of 79 AD upset the whole area around the Vesuvius. A column of volcanic material caused a rain of lapilli and ashes that covered the town of Pompeii and surroundings. A burning cloud of pyroclastic material hit the whole territory. Herculaneum was buried under a mudflow up to 20 meters (65 feet) high.

As in Pompeii, the archaeological excavations began in the mid-18th century (1738) by pure chance, during the construction of a well!
Over the years, amid various interruptions mainly due to the lack of funds, most of the ancient centre has been unearthed: this archaeological site is less famous but as fascinating as the nearby Pompeii.

Herculaneum, was probably founded by the Osci, as the city of Pompeii. It was named after the Greek hero Heracles and came under the influence of the Greeks from Naples and Cumae, then controlled by the Samnites. During the Roman period the city became a residential and holiday resort, unlike Pompeii, which was more a commercial city.

In 79 AD the catastrophe buried everything with mud that has perfectly preserved the ancient artifacts over the centuries. Even organic materials such as fabric, wood and food have been found almost intact.
It is supposed that the extension of ancient Herculaneum was about a third of that of Pompeii, with a population of around four thousand inhabitants. The excavations have brought to light a small part of the original city, which can provide however a detailed picture of the daily life in that era.

In the 1980s the bodies of about 300 people were discovered who tried to seek refuge towards the beach, hoping to be rescued. Among these, the remains of two women are "famous": an eight-month pregnant woman and the so called "lady of the jewels" because of the rich ornaments she was wearing. On the ancient beach, however, the remains of a rescue boat were found: it is probably a military lance from the Pliny the Elder fleet that came to the aid of the fugitives.
This assumption is confirmed by the discovery of the skeleton of an officer (recognized through the particular belt and equipped with a sword and a dagger he was wearing), three pairs of oarsmen and a helmsman.

While wondering through the old streets (decumani and cardini) you can observe the various residential areas of ancient Herculaneum. The stately homes in the southern sector are particularly noteworthy: rich houses, finely decorated and overlooking the sea, which was in ancient times closer than today. 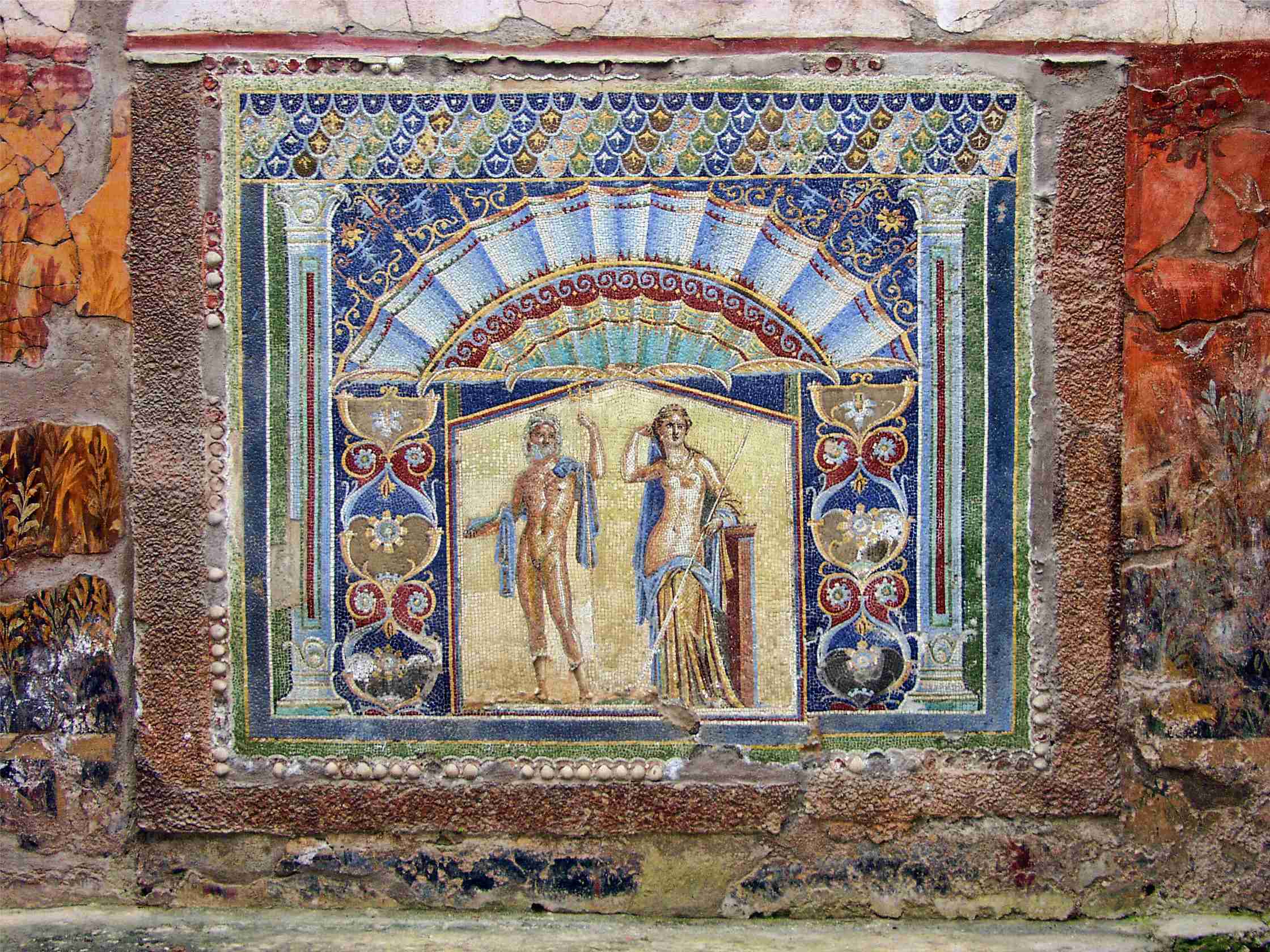 Old shops, workshops, houses of worship and leisure places are still standing despite the catastrophe: even three large bathhouses have been discovered! Both the wealthy people and the middle class loved spending most of their free time in those bathhouses, located nearby the gym, another imposing and finely decorated structure equipped with a large garden and a swimming pool. The Roman gym was similar to a Greek Gymnasium: a multi-purpose facility designed for the education of young people and to accommodate sports and religious associations. Unfortunately this building, like the theatre (another huge structure dedicated to shows and events), has not been brought to light entirely, but most of the artifacts and statues found inside can be admired in the archaeological museum of Naples.

A fascinating walk through the ancient streets of Herculaneum is waiting for you! If you want to save time and easily understand the greatness of a two thousand years old civilization, you can rely on us: let’s start together this incredible experience without missing any important detail that this amazing archaeological site has to offer.

Half day visit if the archaeological site (2-3 hours)