Pompeii is probably the most famous ancient city in the world. It originated in the seventh century BC from the merger of several agricultural centres located in the area around the mouth of the Sarno river. Thanks to this favourable position, Pompeii became a prosperous commercial town.

In the following centuries, the most ancient monuments were built and Pompeii passed under the control of the Greeks, Etruscans and then of the Samnites. The city experienced a period of growth and urban development, which led to the construction of public buildings and residential areas. In 89 BC Pompeii surrendered to the Romans who remodelled many structures giving them the characteristics of a typical Roman city. The Vesuvius in 79 AD completely destroyed the area and left the city buried under the volcanic ash for almost 1700 years.

The excavation works began in 1748, during the reign of the Bourbons: it took more than 200 years to unearth about three-fifths of the city. Today the work of the archaeologists focuses mainly on maintenance and restoration.

The city is a collection of civil and private buildings, monuments and sculptures so precious for history and archeology, that UNESCO has recognized Pompeii as a World Heritage Site. A long and imposing wall initially surrounded the city. Streets and neighbourhoods were very well organized: the main roads connected the monumental complexes to the gates and to the suburbs.

The decumani (main roads) were equipped with large sidewalks and pedestrian crossings with huge blocks of stone that did not hinder the passage of the wagons. The centre of city life was concentrated around the forum (main square), which was entirely pedestrian. Here you can still see the buildings of the public administration, religious and leisure places, such as temples, theatres, the amphitheatre, the macellum, the basilica, bathhouses…

Ancient Pompeii is mostly composed of private houses: those interesting discoveries were a great help to study the architecture of Roman houses and to understand the daily life of the former residents (including customs and habits). The domus of the richest citizens are particularly noteworthy: some of those had a highly articulated structure and an extension of more than 3000 square meters (such as the “House of the Faun”). The poor families, however, had much smaller and simpler houses.

The most stunning aspect of the Pompeian houses is the decoration of the rooms, characterized by brightly coloured frescoes and mosaics forming geometrical patterns or scenes from the natural world, hunting or navigation. 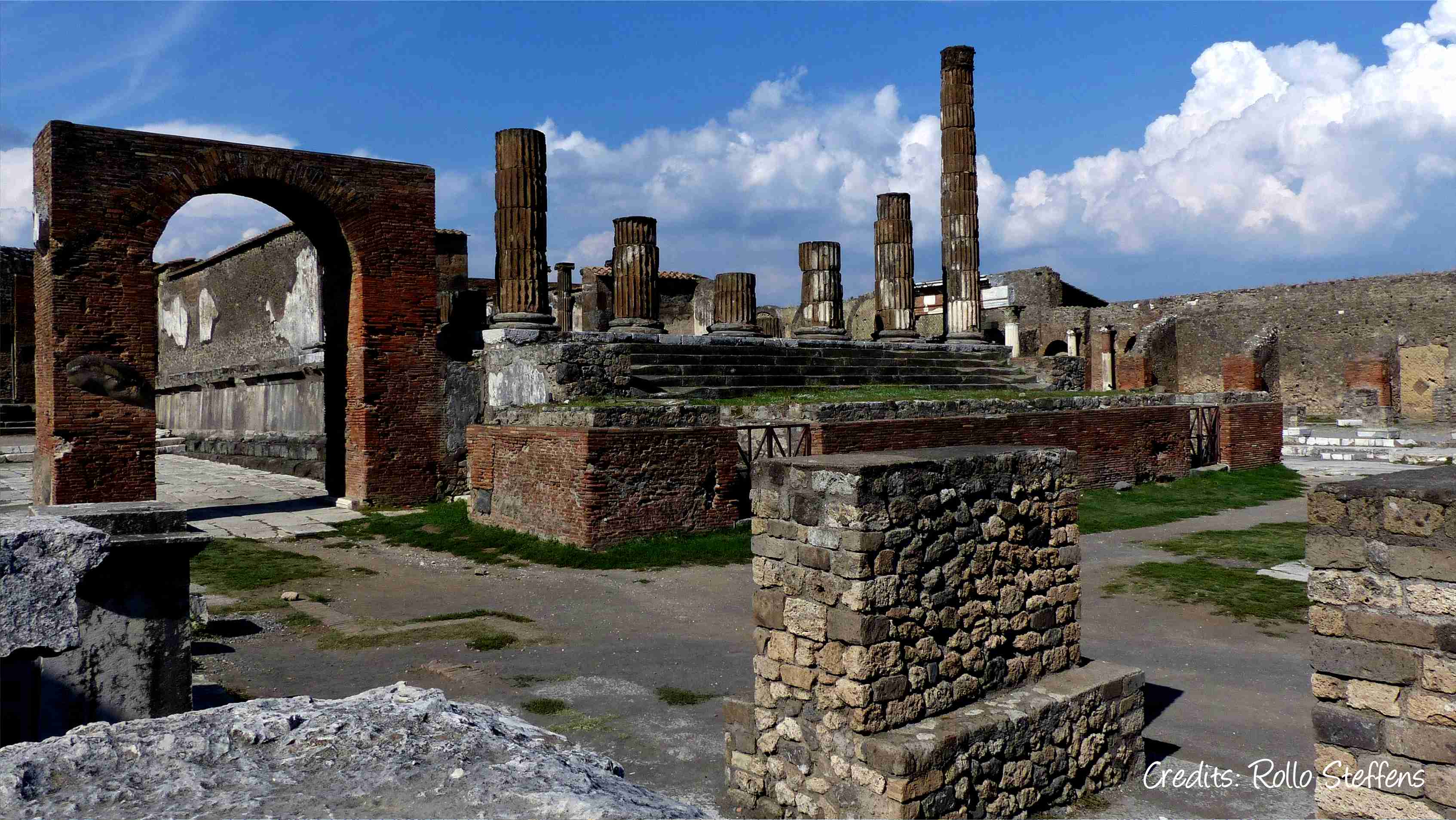 The casts of its inhabitants are another interesting and famous attraction of this Roman site. During the tragic eruption of 79 AD over a thousand victims were documented In fact, the city was hit by a high temperature pyroclastic flow which caused the instant death of those who didn’t manage to flee in time. The volcanic material has preserved the "footprints" of the bodies, which have been reconstructed using plaster. The result is astonishing and it shows us exactly in which position the people passed away.

The archaeological site is pretty large, (66 hectares or 165 acres): it is a wonderful experience feeling lost while exploring the streets and thousands of city buildings, but unfortunately this would take whole days! If you don't have much time available you can rely on us: let’s discover together the most fascinating places of the most famous archaeological site in the world.