The province of Caserta includes territories, which used to form the main area of the region called Campania: with this name, in fact, until the unification of Italy, it indicated the manly area surrounding Caserta and Capua. This is a varied territory, between the sandy coast, crossing the fertile plains, cultivated since ancient times, and the mountains: the summit of the extinct volcano of Roccamonfina and the chain of the Apennines on the northern side, whose highest reliefs are the imposing massifs of the Matese mountains.

Just as the landscape, even the history of this region is varied, complex and rich: traces are still remaining from Roman and pre-Roman times in the centres of Santa Maria Capua Vetere, Teano and Sessa Aurunca. Testimonies of the medieval era are instead cathedrals and other buildings, scattered throughout the territory.

The real jewel of the area is the imposing Royal Palace of Caserta, designed by Vanvitelli. This colossal building, with its monumental gardens, is perhaps the Italian palace most similar to the royal residence of Versailles. Unesco World Heritage Site since 1997, the sumptuous Bourbon residence with its park is a world-famous tourist destination: 1200 rooms that celebrate the last great realization of the Italian Baroque. The palace was chosen as a hunting lodge by the king Ferdinando IV of Naples. His wife Maria Carolina took care of the decorations: she brought to Caserta an important art exposition and a large collection of porcelain.

Perhaps the real pearl that the Reggia has to offer is its park: 3 kilometres long, it covers an area of about 120 hectares. 6 fountains and basins, populated by numerous fish, divide the Italian from the English garden: the first one created by Ferdinando IV, the second by his wife. The Italian garden was used for military practice, land and naval battles: in fact, in this part of the park there is still a large artificial lake, at that time full of models built specifically for those exercises. The English garden, on the other hand, was built according to the British trend of that period, with outdoor spaces as similar as possible to real natural landscapes (according to the canons of Romanticism).

Before the construction of the Royal Palace, the town did not exist: until 1752 the small village “La Torre” was located here. Charles VII of Naples bought it from a noble family. The name of the city derived from that of ancient Caserta, which later became Casertavecchia.
This medieval village lies on the slopes of the Tifatini mountains, 401 meters above the sea level and 10 kilometres away from the city of Caserta.

Casertavecchia is worth a visit because of the Cathedral, the bell tower, the remains of the castle and the scenic streets of the entire village, reminders of its past glory. 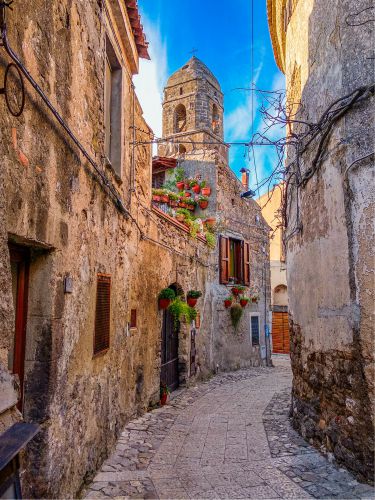 Pompeiexperience offers you 3 different itineraries to explore the best of Caserta and surroundings, depending on the time you have available and according to your interests. Choose the tour you prefer or contact us to request more information!

Tour 1 (half day)
Visit of the Royal Palace and its majestic park.

Tour 2 (half day)
Visit of the medieval village of Casertavecchia.